Our Marijuana DUI attorneys that fight for you and care about you.

Our Marijuana DUI Lawyers Are Here To Help

Although most people think of alcohol when they think about a DUI (or DWI) charge, North Carolina drivers can be charged with DUI in a variety of other situations that do not involve alcohol.

One of the most common scenarios involving driving under the influence of illegal drugs is a marijuana related DUI. If the officer believes that a driver is impaired by an illicit drug (such as marijuana), the officer will ask for a urine sample, blood sample, or both. Although there are ramifications on refusing to volunteer a urine sample or blood sample, a person charged with DWI may refuse these tests.

If you are in need of further legal assistance or are looking for legal answers, contact our Marijuana DUI lawyers today.

What is a Marijuana DUI?

Although most people think of alcohol when they think about a DUI (or DWI) charge, North Carolina drivers can be charged with DUI in a variety of other situations that do not involve alcohol.

One of the most common scenarios involving driving under the influence of illegal drugs is a marijuana related DWI. Imagine the following scenario: a driver has just been pulled over after leaving a party where he was smoking marijuana. He hadn’t been drinking. What should he expect?

In North Carolina, officers go through various trainings to detect an individual’s impairment by drugs or alcohol. The basic training concentrates primarily on investigating alcohol related DWI and Standardized Field Sobriety Tests (SFSTs). Virtually every patrol officer receives this training. The officers are trained to detect only the presence of some impairing substance—namely alcohol.

There is a more complex DUI training called Advanced Roadside Impaired Driving Enforcement (ARIDE). A good number of NC State Troopers have ARIDE training, although local law enforcement offices usually have a few officers trained in this manner as well. At ARIDE training, the officers receive additional training in the concept of “drugged driving”. The officer gets an overview of the seven different drug classes, and learns about some eye examinations and field sobriety tests that are not included in the basic SFST course.

Let’s assume that a driver is pulled over by a non-DRE officer, that is, an officer with only basic SFST training, or with ARIDE training.

The officer will make initial observations about the driver during their initial request for the suspect’s license, registration, and insurance. These observations are entirely subjective—the officer will form an opinion about the driver’s eyes and the odor in the car or on the driver’s breath. Obviously, the presence of paraphernalia or drugs in open view in the passenger compartment will affect the officer’s impression of whether or not the driver is under the influence.

If the officer forms the suspicion that the driver may be impaired by marijuana (or any other illicit substance), the officer will ask the driver to exit the car and perform the field sobriety tests that the officer has been trained to utilize. Because many illicit drugs can cause balance problems, eye issues, difficulty perceiving the passage of time, etc., it is very possible that a person may fail some or all of those tests.

The officer will likely then administer a roadside Portable Breath Test, which in our scenario would rule out the presence of alcohol as the reason for a driver’s inability to perform the tests as prescribed.

If the officer believes that a driver is impaired by an illicit drug (such as marijuana), the officer will ask for a urine sample, blood sample, or both.

Although there are ramifications on refusing to volunteer a urine sample or blood sample, a person charged with DWI may refuse these tests. The officer will thereafter attempt to find a magistrate to obtain a warrant to draw blood. In an era where most counties have a magistrate available 24 hours a day, it is very likely that a warrant is granted, and that blood is drawn with or without the defendant’s consent.

After blood is drawn, it will be sent to the NC State Bureau of Investigation for testing. In North Carolina, blood work routinely takes a year or more to get back. The lab will test blood for all substances, illicit and legal. If an illicit substance was in the driver’s system at the time of arrest, in virtually any amount, a defendant could be found guilty of driving while impaired. However, just because a driver has an illicit substance in their system (THC for example), does NOT mean that they were impaired by that substance at the time of driving. The same is true for any other chemical, like cocaine or heroin. Many drugs remain in a user’s bloodstream well after the effects of those substances have long since worn off.

A trained attorney will know whether there was probable cause to request a blood draw, and whether or not the results from those tests could be suppressed. Further, the attorney will know what experts should be called to testify as to whether or not the substances in a person’s body were “active” at the time of arrest, and whether the quantity found in the blood was sufficient to be impairing.

I had a wonderful experience with the staff at Minick Law, and was pleased with the work that James Minick himself did on my behalf. He not only worked before and during my case, but helped guide and assist me two years afterwards. He's a good man, but also highly intelligent and he knows how the legal system works.

Attorney Minick and his staff are professional, knowledgeable, courteous, and efficient. All questions were answered in a timely, respectful, and friendly manner. The firm's attorneys are devoted and their areas of expertise are far-ranging. This firm is top-notch!

knows how to get the job done!

This Law Firm really knows how to get the job done! What a wonderful and pleasant experience knowing and trusting that they would help me out in my time of need. All the attorney's here are very professional and easy to deal with. I highly recommend The Minick Law Firm for any of your needs. Thank you!

My experience with Minick Law can be best described as excellent. I received optimum results in my case with much attentiveness to my questions and concerns. From my attorney...to the office staff, I can only say thank you, and job well done!

exceeds the expectations of a law firm

Minick Law exceeds the expectations of a law firm and demonstrates many outstanding professional qualities. Of these qualities, three really stand out: high level expertise, honesty, and excellent communication. Thank you all for your superior work!

The manner with which [Minick Law] handled our situation was very professional. They saw that all questions were answered and we were at ease with what would occur. I would highly recommend Minick Law Group to anyone needing their services.

The testimonials and endorsements listed do not reflect all of the feedback the firm has received. Each case is unique and must be evaluated on its individual merits. Prior results do not guarantee a similar outcome. 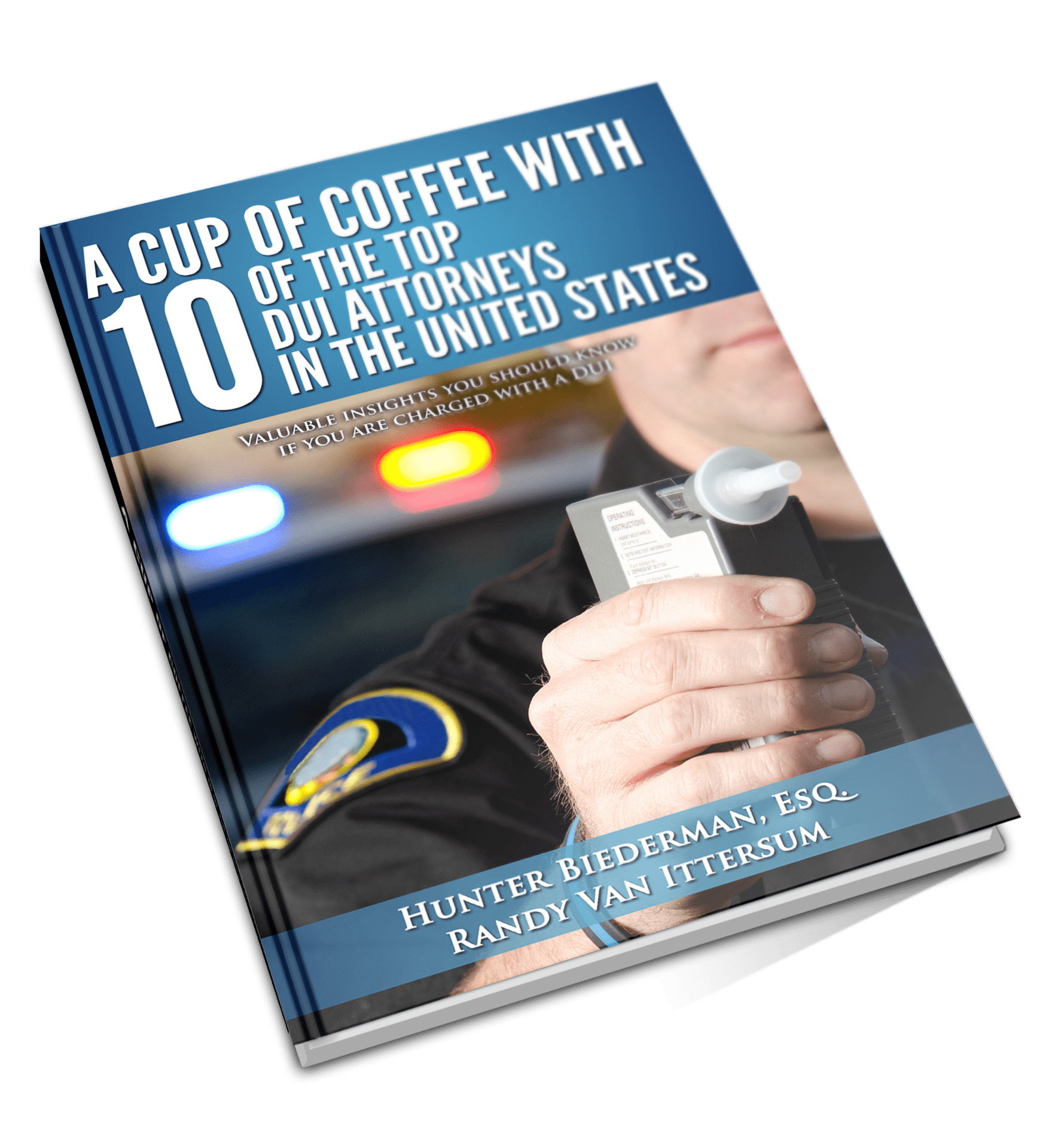 James Minick is the co-author of A Cup of Coffee with 10 of the Top DUI Attorneys in the United States. This is meant to be a guidebook for anyone facing a DWI charge and its consequences. 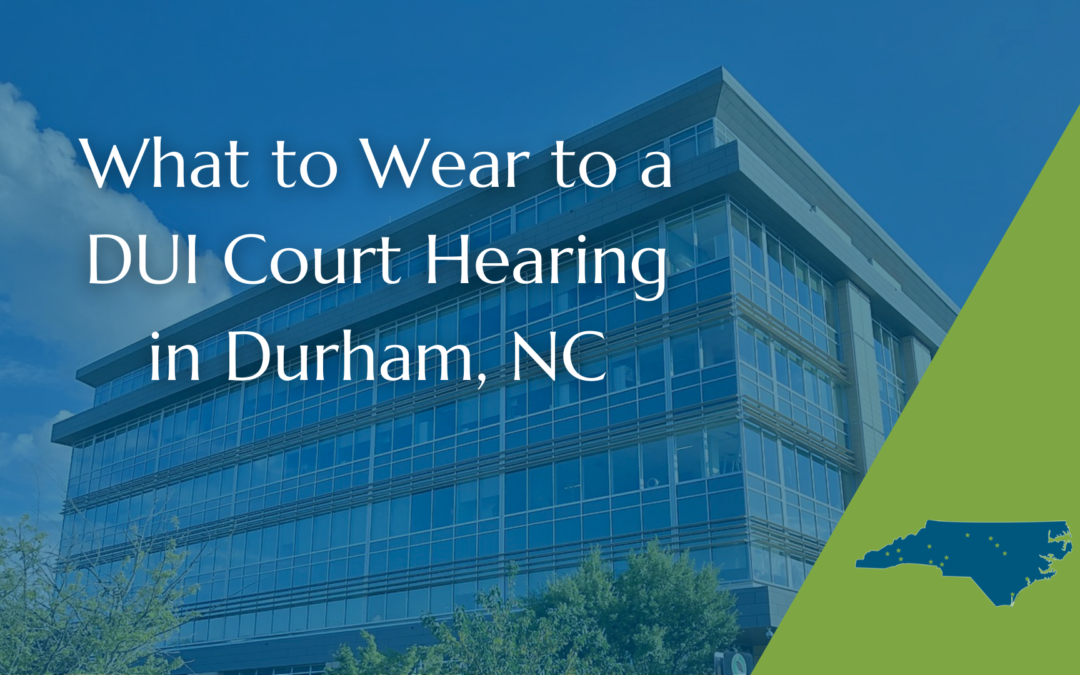 What to Wear to a DUI Court Hearing in Durham, NC

Are you wondering what to wear to your DUI court hearing in Durham, NC? Minick Law provides good guidelines for both men and women. 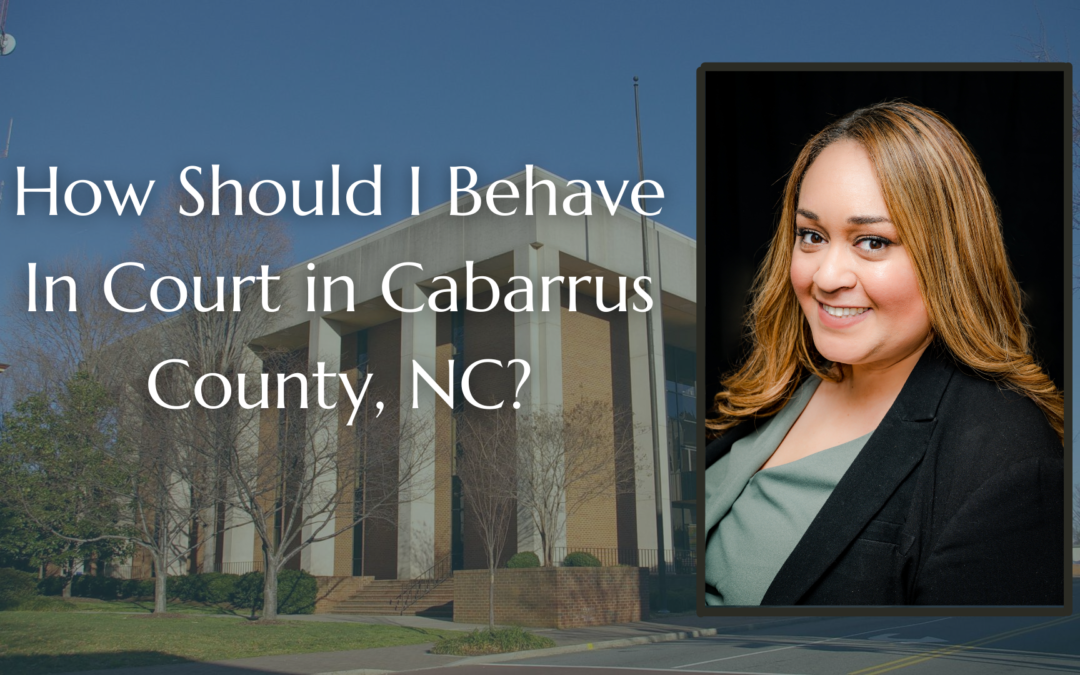 How Should I Behave In Court in Cabarrus County, NC?

How should I behave in the Cabarrus County court? Minick Law, P.C. talks about the the proper behavior to use in a courtroom. 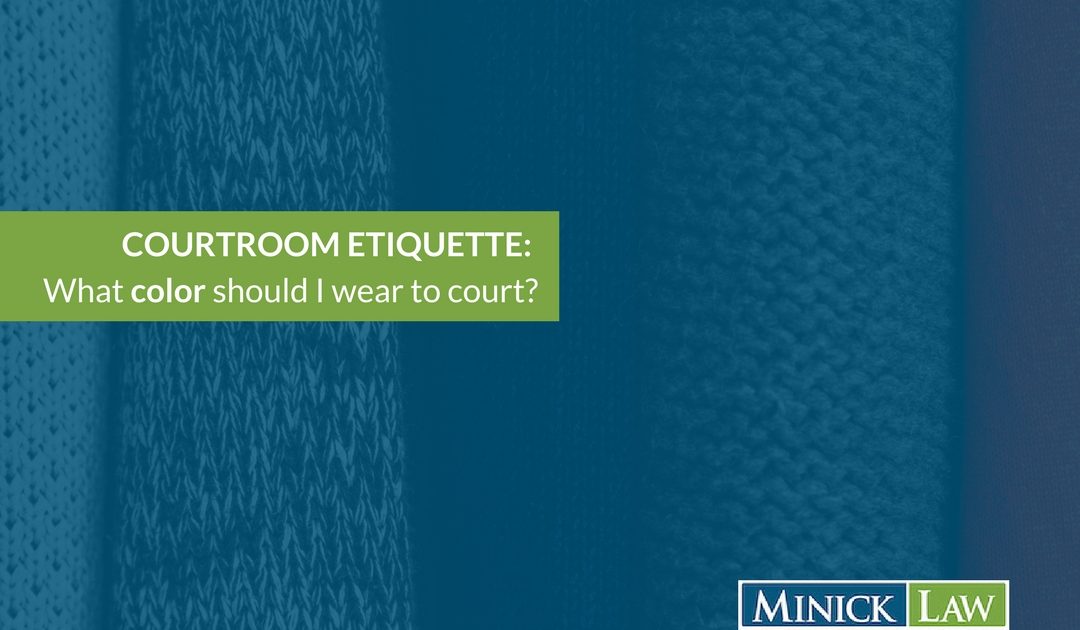 What Color To Wear To Court

While the color of the outfit you have decided to wear to your court hearing is probably that furthest thing from your mind as you prepare to appear in court, it is nevertheless highly important. Books have been written on the subtle cues color and appearance can have... 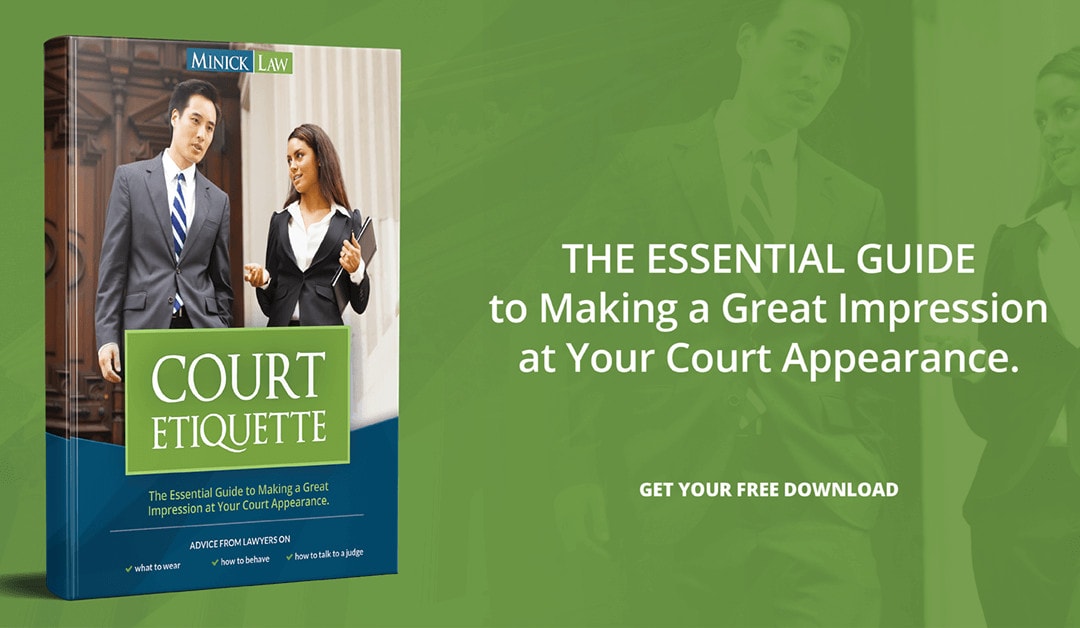 What To Wear To Court

Knowing what to wear to court, how to behave in court, and how to talk to a judge are extremely important (yet often forgotten) elements in your court appearance. Making a great impression in the courtroom and putting your best foot forward to the judge and jury can... 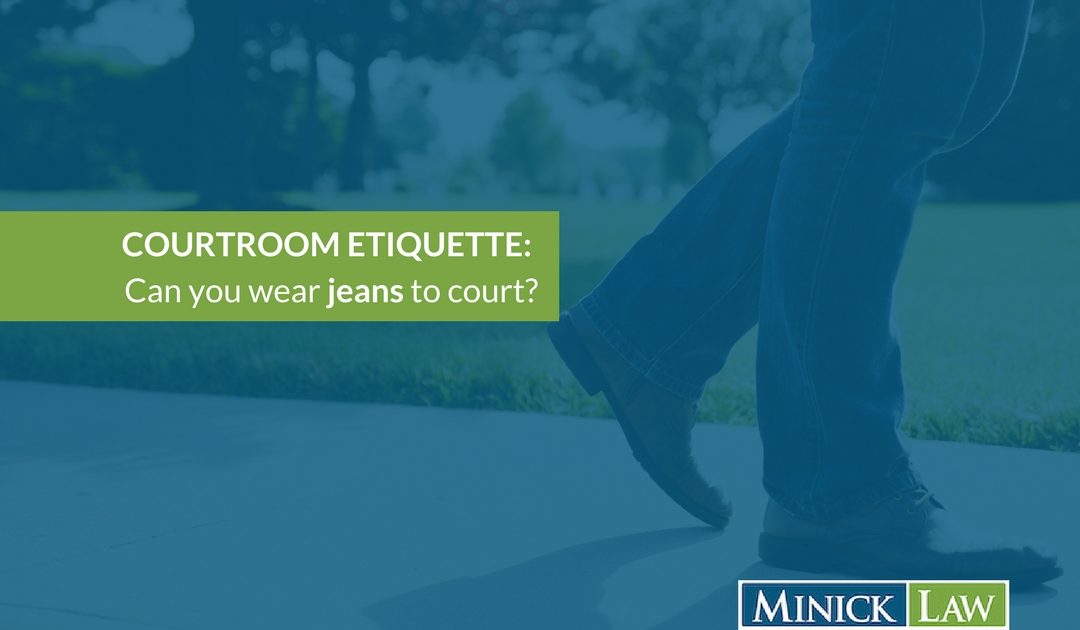 Can You Wear Jeans to Court?

For those of us who are not lawyers or bailiffs or judges, going to court is not a normal part of our daily lives. Whether we are called into court as the defendant, a witness, or a member of the jury, it is important to know how you are expected to dress when you go...

If you have been charged with a DWI, there are probably a million questions and worries that are running through your mind. However, probably the most important question you have is, “how much is this going to cost me?” While “it depends” is unfortunately always the...

What Happens During Booking in Durham, NC?

What happens during booking in Durham, NC? Minick Law, P.C. takes a look at the general booking process to let you know what to expect. 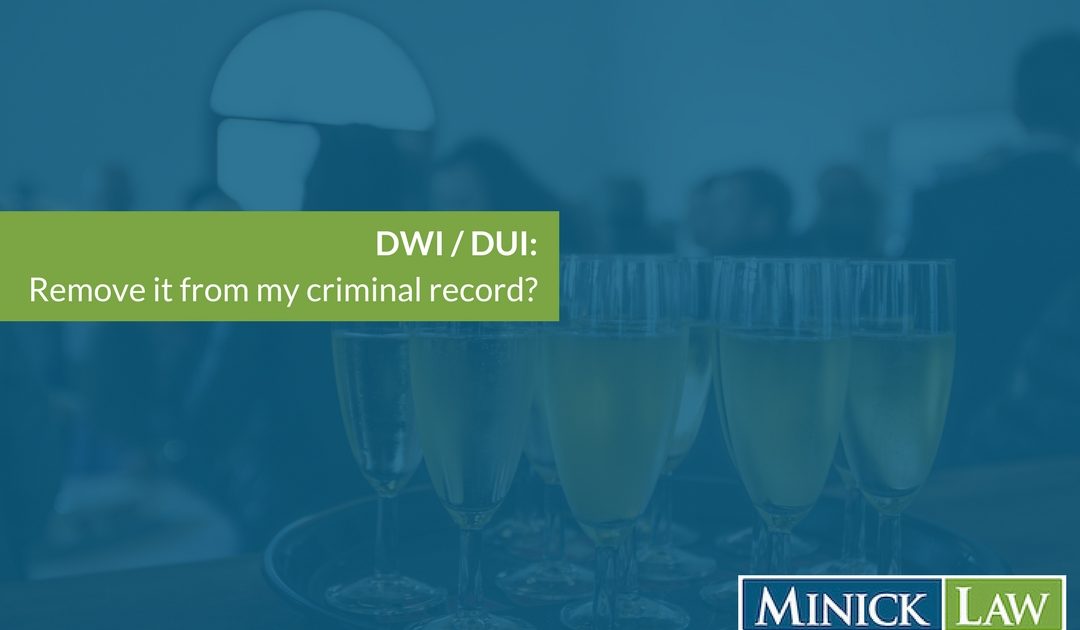 Can I Get a DWI Expungement in Durham, NC?

Can I have a DWI removed from my criminal record in Durham, NC? This article explains what it takes to make your record clean.

What are the Ramifications of Refusing a Chemical Analysis in Concord, NC?

What are the ramifications of refusing a chemical analysis in Concord, NC? A look at what implied consent means under North Carolina law. 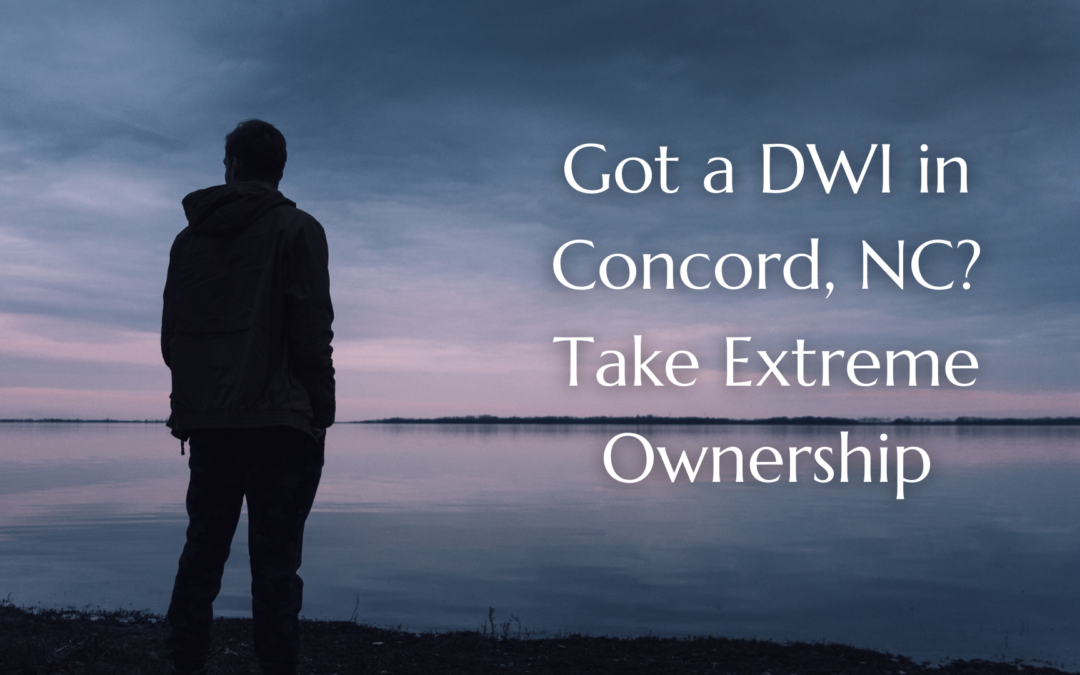 Got a DWI in Concord, NC? Take Extreme Ownership

The client who owns his DWI can look at the circumstances which led to the charge and decide never to allow them to happen again.